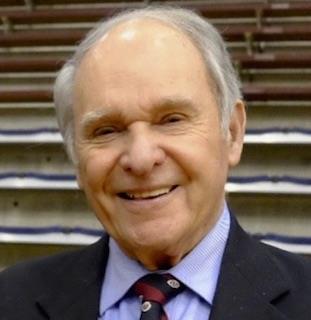 Ronald P. Sherry graduated from Liberty High School in 1950.  He attended West Chester State Teachers College (now West Chester University), where he received a Bachelors of Science in Music Education.   He went on to Penn State University to receive a Masters degree in Music Education.  Ron fulfilled a major life goal in 1961, when returned to Liberty to become the high school’s band and orchestra director.  He held this esteemed position for 30 years.  In fact, in 1967, Ron was responsible for transitioning our beloved band into the Liberty Grenadiers. During his career the band recorded 6 LP records, marched halftime at 28 Pro football games, marched in 3 Macy’s Parades and 8 Miss America Parades, competed in The Festival of States 5 times and won the prestigious Governor’s cup and Mayor’s Trophy.  Ron’s proudest life moment was conducting the combined bands of Her Majesty’s Coldstream Guards and the Liberty High School Grenadiers at Royal Albert Hall, London England.  In 1992, Ron retired to spend time with his family and remains an avid train buff and bird watcher.  He also remained connected to his alma mater for many years as the Director of the LHS Alumni Band.